Basseterre, St. Kitts, May 31, 2017 (RSCNPF): The value of continued searches of abandoned and vacant properties by the Police was underscored on Monday (May 29) when officers discovered an indoor hydroponic marijuana growing operation in a vacant house located in Lambert’s.

Officers on a crime prevention and citizen safety patrol investigated a vacant property while on patrol. Their actions resulted in the discovery of an indoor marijuana growing operation. 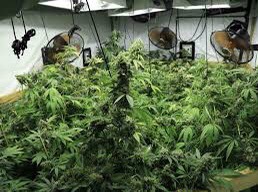 Photo Caption: Original photo of marijuana seized by the police
The officers seized about one hundred (100) marijuana plants with heights between five to six feet.

In addition, a number of items to support the hydroponic growing operation were seized including water hoses, LED Lighting panels, a transformer, a fan, thermostats, electrical cords and a surge protector.

Commenting on the discovery, Commissioner of Police Mr. Ian M. Queeley said, “this find is an indication that our ongoing counter marijuana cultivation operations are having an impact. We now see a move towards indoor cultivation, and so our continued patrols, and searches of abandoned properties, vacant houses and lots have paid off.” Commissioner Queeley added, “in this fight against illegal drugs when we gain ground in one area the producers will become creative, and so will we.”

Commissioner Queeley expressed his appreciation for the continued commitment displayed by the Officers on a daily basis in efforts to ensure citizen safety and said “I want to commend the officers who day in and day out are on patrol, who are involved in investigations, who walk the beat. I say stay focused, it pays off. It did on Monday (May 29) for the men in “District B” and we have seen other units doing good things day in and day out, stay focused.”