BHS staff room broken into over the weekend 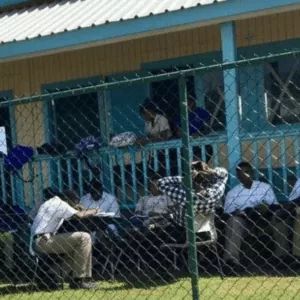 Basseterre, St. Kitts, June 27, 2018 – The temporary Basseterre High School (BHS) at Taylors, was broken into last weekend, according to a reliable source.

“A window panel in the deputy principal’s office which is in the staff room was removed to gain entry and the place was searched up,” a source said. It was not immediately known if any items were stolen but locks were changed said the source said.

A report on the break-in that occurred overnight last Friday night/Saturday morning has not been reported by the police.

The temporary site has been constructed by the Timothy Harris-led Team Unity Government and promised that a new school will be built on the water table, after Dr. Harris and Education Minister Shawn Richards rejected reports from local scientists, the Trinidad-based Caribbean Public Health Agency (CARPHA), the Caribbean Industrial Research Institute ( CARIRI), also based in Trinidad and the Washington-based National Institute for Occupational Safety and Health (NIOSH) of the Centers for Disease Control and Prevention (CDC).

They all recommended that the buildings could be inhabited after remedial works, which had already begun to the tune of EC$7 million are completed.

Although the reports were rejected, Harris’ PLP/CCM/PAM Government removed three buildings from the original site and are using them as classrooms and to house the principal’s office at Taylors.

Desk, chairs, tables and air condition units were also removed and installed at the temporary BHS facility as well, as he Verchild’s High School and other schools.

Several of the persons including principal Mrs. Carleen Henry-Morton, Guidance Councillor, Ron Collins and Thelma Phillip-Browne, who perpetuated the conspiracy, have abandoned the teachers, students and parents.