Band leader, Mr. Cory Tyson along with lead singers Delroy ‘Delly Ranks’ Huggins and Jevaun ‘Speedy’ Jeffers informed fans of what to expect from the band for the upcoming Culturama Festivities.

Tyson gave an extensive overview of what to expect. Tyson said:

This year we are rolling out some new initiatives:

-Kore will be partnering with Island Purified Water, Caribe Pay and Caribe Tickets.

-In addition, the band is partnering with Jiggy Wine for a second consecutive year.

Delly informed the listeners that Center Base, (An event held to promote Kore packages and songs) will be held on June 22nd at Marketshop while Speedy hinted that the first Kore track will be released on April 12th. According to Speedy, from tonight, (April 2nd, they will be in the Studio: beats already made, lyrics already penned… “Just plug-in.” 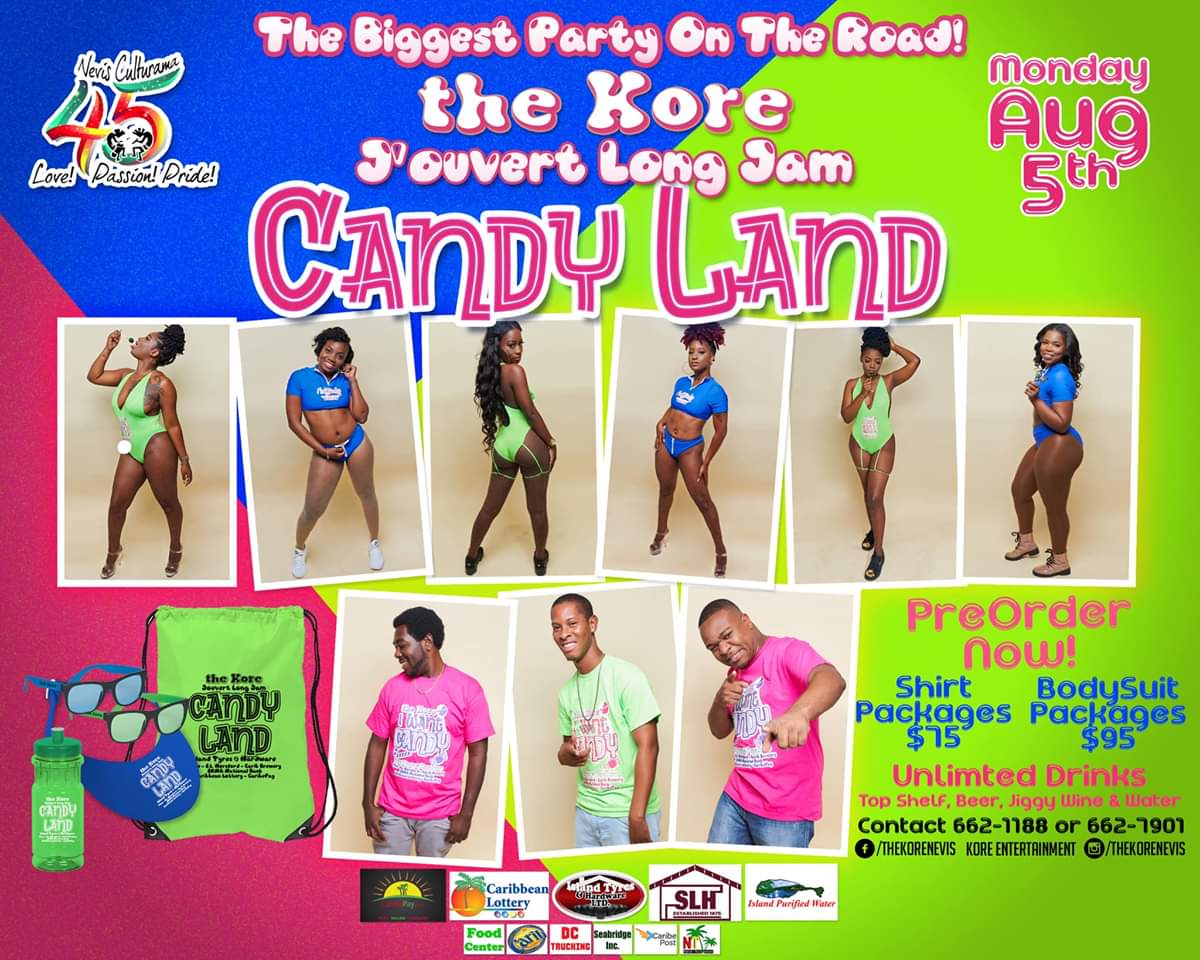 Women Revellers can choose from two body suits, a one piece and a two piece. The available colours are blue and green.

Kore is offering four options for your Jouvert packages.

We are not increasing the prices for the packages this year. We are sticking at $75 for the T-shirts and $95 for the body suits. We are adding but not adding to your Culturama expenses.

In attendance were some of the sponsors. Represented were Horsfords, (Mr. Carlisle ‘King Binghi’ Pemberton), Caribe Post, (Tricilla Arthurton), Caribbean Lottery, (Ms. Sabina Harrinarain) and Caribe Pay, (Mr. Anthony Gajor). All of whom gave brief remarks about their partnership with Kore. Legal adviser to the Government, Mr. Colin Tyrell was also in attendance as well as Director of the Nevis Cultural Foundation, Mr. Jerome Rawlins.

Also in attendance was Chairman of the St. Kitts and Nevis National Carnival Committee, Mr. Noah Mills. In his brief remarks, he brought greetings from the committee, the ministry and Hon. Shawn Richards. He congratulated the Kore team for being the first band to have such a reveal in St. Kitts and Nevis.

When I think of Kore Band, three words come to mind:

The band having toured St. Maarten, Anguilla and Montserrat lately is being considered to travel to CARIFESTA in Trinidad later this year, according to Mills he is batting in their corner. The SKNCC Chairman extended an invitation to Kore to bring the Long Jam to St. Kitts. Last year, Kore was featured during the Carnival celebrations.

Adopting the protocol that was established, the Chairman acknowledged the presence of ‘King Binghi’ and gave a brief history of the Long Jam which he said commenced in 1989 by the Kassanova Band.

We are using the promotions leading up to culture 45 to promote another home-coming.

Persons coming to culturama this year, would be getting more folklore content.

This year would make eight years Kore Band has been doing the Long Jam. With their first go round, they had thirty revellers.

They are proud to say, they are pushing thousands of Revellers.

Caribbean Awards Laureates thank those who came before