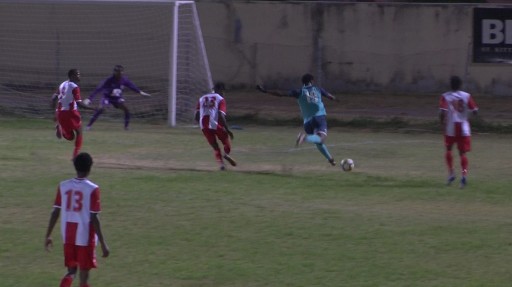 It will be a Village-Conaree showdown for the 2017/2018 SKNFA National Bank Premier League title as the finalists have been decided. SOL IAS Conaree F.C. drubbed S.L. Horsfords St. Pauls 4-1 in the first game of the double header on Sunday at the Warner Park to book their finals spot, while Rams Village Superstars came from behind to defeat defending champions Flow 4G Cayon Rockets F.C. 2-1 to knock the latter out of the competition. Prior to Sunday’s games, St. Pauls needed only a win to guarantee a spot in the finals to face Village that were already in the finals since last Wednesday. Conaree F.C. needed to win by three clear goals if there were to have a chance to make it to the finals. They took the lead in the first half through a Glenroy Samuel strike in the 34th minute. Below is the match result.

The league’s top scorer Carlos Bertie was in the starting lineup for the first time in the playoffs and he made his mark known in the 23rd minute.

At the end of the match, Coach Jeffrey Hazel of Village commended his player for making the necessary adjustments for the victory. “In the first half we just didn’t play our style. We tried to give some guys who brought us here to the finals, to give them some minutes in this game—see what they are capable of doing in preparation for the finals. In the second half we came out with a different mentality,” Coach Hazel said.

Coach George Isaac was in his usual optimistic mood and offered a positive assessment of Cayon’s season. “The season wasn’t an easy season, but still we could have made it a little easier for us,” he said. “It was a tough season. There were some tough losses and coming on to the end there were a lot of games.”

So with the round robin matches now ended, Village and Conaree will play in the finals starting next week Sunday at 7pm at the Warner Park Football Stadium for Game 1. Game 2 will be on Wednesday June 20th and if needed game three will be on Saturday June 23rd.

Standing after round robin matches: