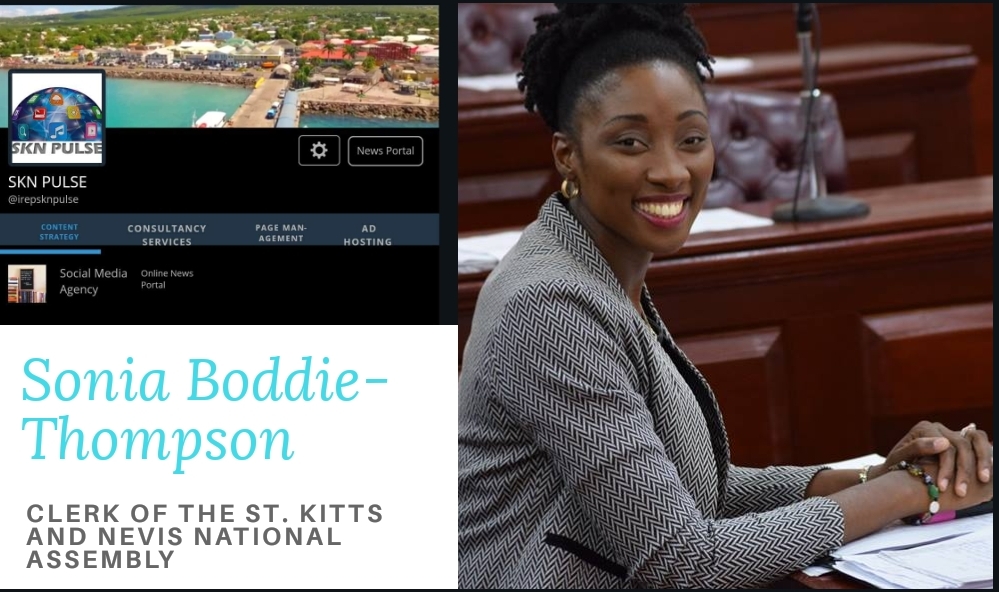 Basseterre, St. Kitts, May 5, 2018 (SKNIS) – Former Deputy Clerk of the St. Christopher and Nevis National Assembly, 33-year-old Mrs. Sonia Boddie-Thompson, has been promoted to the post of Clerk of the National Assembly with effect from November 1, 2017. This promotion makes Mrs. Boddie -Thompson, the current youngest Clerk of Parliament, of the Caribbean, the Americas and the Atlantic Region Branch of the Commonwealth Parliamentary Association.

Mrs. Boddie-Thompson’s promotion was made public yesterday May 4, 2018, by Speaker the Hon. A. Michael Perkins during a Sitting of the National Assembly. Speaker Perkins informed the House and the nation that His Excellency the Governor-General had recently approved Mrs. Boddie-Thompson’s elevation after a recommendation from the Public Service Commission.

In his congratulatory remarks to Mrs. Boddie- Thompson, the Speaker noted that he was confident that her assumption of the position of Clerk will redound to the increase in the efficiency of the operations of the Parliament. The Speaker also informed that Mrs. Boddie-Thompson had recently returned from a training in Canada on Parliamentary Practice and Procedures, which was timely and useful as it has further equipped the new Clerk to better undertake her role.

Mrs. Boddie-Thompson participated in the Parliamentary Officer’s Study Programme in Ottawa, Canada, at Parliament Hill, from April 16-27, 2018, which provided her with a first-hand opportunity to observe and learn about the functioning of the Canadian Parliament System.

According to Mrs. Boddie-Thompson, “ The Parliamentary Officer Study Programme is an exceptional professional development programme for parliamentary staff, which not only provides participants with a better understanding of the workings of the Canadian Parliament, but also provided me with a great platform to reflect on our own unique experiences here in St. Kitts and Nevis, and to exchange ideas, experiences and best practises with facilitators and parliamentary colleagues from 12 other countries, from across five continents. I have returned from Canada, even more enthusiastic about my role and it is my intention to share and apply the knowledge which I have gained towards the modernization of the work of our Parliament.”

Mrs. Boddie-Thompson officially joined the National Assembly of St. Christopher and Nevis in November 2016 as Deputy Clerk. A Chevening Scholar, she holds a Masters Degree in Public Administration with Merit from the University of Birmingham in the United Kingdom, and completed a dissertation entitled “Hindrances to the Proper Functioning of the Public Accounts Committee in St. Kitts and Nevis” in fulfilment of her degree.