Hurricane Watch In Effect for Dominica 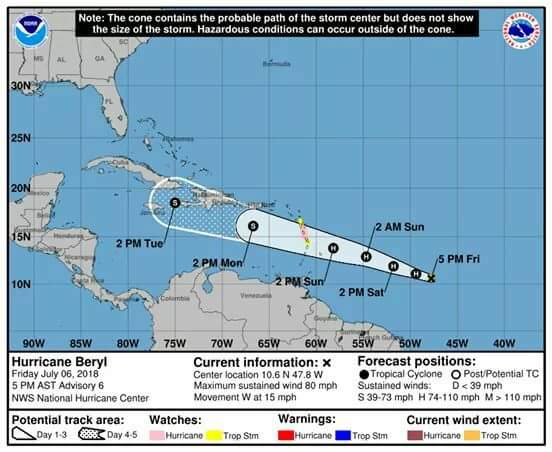 Hurricane Beryl is expected to gain strength in the coming days and could still be a hurricane when it arrives to the Lesser Antilles islands late Sunday or Monday; With Martinique, Guadeloupe, St. Martin and St. Barthelemy under tropical storm warnings and Dominica under Hurricane watch, persons are asked to take the necessary precautionary measures.

The latest forescasts said interests elsewhere in the Lesser Antilles should monitor the progress of Hurricane Beryl, as additional watches could be required for other islands later tonight or early Saturday.

Beryl is moving toward the west near 15 mph (24 km/h). A faster westward to west-northwestward motion is expected to begin over the weekend and continue through early next week. On the forecast track, the center of Beryl will approach the Lesser Antilles over the weekend and cross the island chain late Sunday or Monday.

With Maximum sustained winds near 80 mph (130 km/h) with higher gusts; Some strengthening is forecast during the next couple of days. The forecasts, imdicates that Beryl could still be a hurricane when it reaches the Lesser Antilles late Sunday or Monday.

While weakening is expected once Beryl reaches the eastern Caribbean Sea on Monday, the system may not degenerate into an open trough until it reaches the vicinity of Hispaniola and the central Caribbean Sea.

Defence team asks Justice Ward to throw “Big Chief” case against Dr. Denzil Douglas; decision to be given on July 13