INMATES AT HER MAJESTY’S PRISON IN ST. KITTS RECEIVE EQUIPMENT TO ENHANCE THEIR PERSONAL DEVELOPMENT 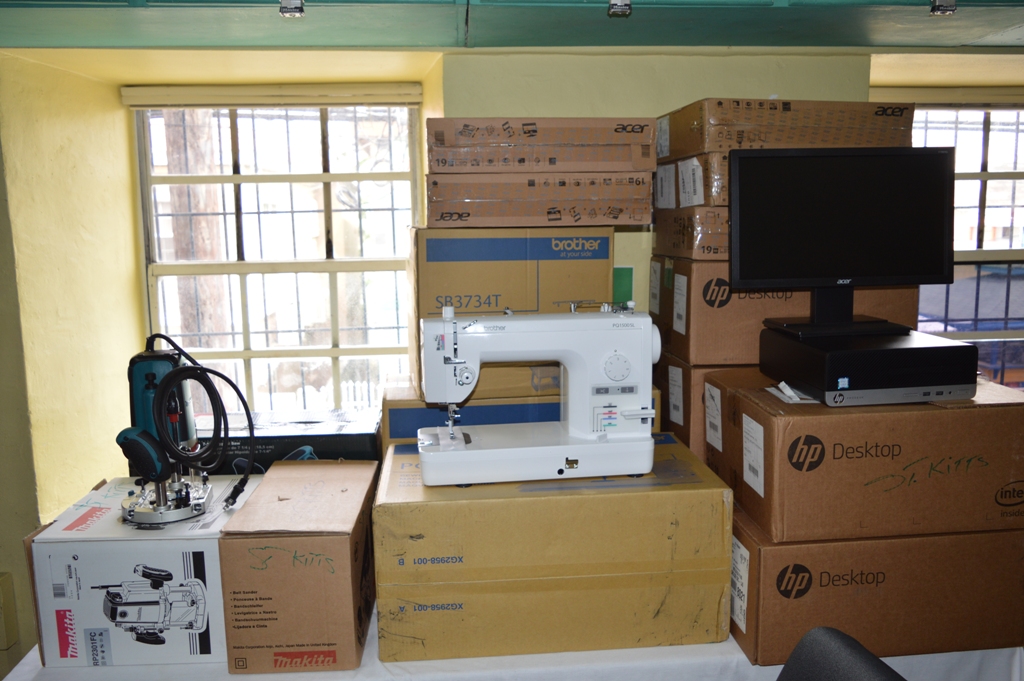 Photo: Tools and equipment donated to Her Majesty’s Prison

Basseterre, St. Kitts, May 16, 2018 (SKNIS): A number of tools and equipment including computers, sewing machines, sanders, saws and wireless routers were donated to Her Majesty’s Prison in St. Kitts for inmates to expand their skills base and knowledge.

The tools and equipment were donated by the Regional Security Services (RSS) and the European Union (EU) under the 10th European Development Fund (EDF) during a brief but meaningful handing over ceremony on Tuesday, May 15, at Her Majesty’s Prison in Basseterre.

“The donation should go a long way in the rehabilitation process of the inmates. It is very important that prisons create an opportunity for prisoners to rehabilitate themselves and also an opportunity for reflection,” said Osbert De Suza, Permanent Secretary in the Office of the Prime Minister, noting that oftentimes prisoners have difficulties finding work once they are released and that is something that the government is working on changing. “The government wants to change that by providing the necessary opportunities and programmes in the prisons to equip our inmates so that when they leave the prison they become a bit more competitive.”

He reiterated that rehabilitation is important so as to not have a number of repeat offenders. He said that the donation will definitely go a long way in equipping some of the inmates to better reintegrate into society once they leave Her Majesty’s Prison. Mr. De Suza made a clarion call for the Superintendent of Prisons to ensure that the tools and equipment are properly maintained and serviced and that they are used for the benefit of all inmates.

Brian Roberts, Director of Training at RSS, said that the institution has embarked on a new direction to compliment the protection of the region’s borders and state security apparatus.

“In addition to success with drug reduction through interdiction, the RSS hopes to contribute to peace and stability by focusing on reducing recidivism in our sub region,” said Mr. Roberts. “This project under the 10thEDF Project represents our first steps, our engagement with correctional facilities to strengthen rehabilitation initiatives. In our acknowledgement of the role of recidivism in national security paradigms in the first instance, we are here today to present to the Government and people of St. Kitts and Nevis some equipment that we believe can assist in the strengthening of your rehabilitation initiatives and the computers, sewing machines, saws et cetera will hopefully improve your technical and vocational training conducted here at Her Majesty’s Prison.”

The director of training added that the project under the 10th EDF project RSS has also embarked on capacity building initiatives which draw upon the experience and wisdom of expertise in the region as a way of improving rehabilitative measures in correctional facilities.