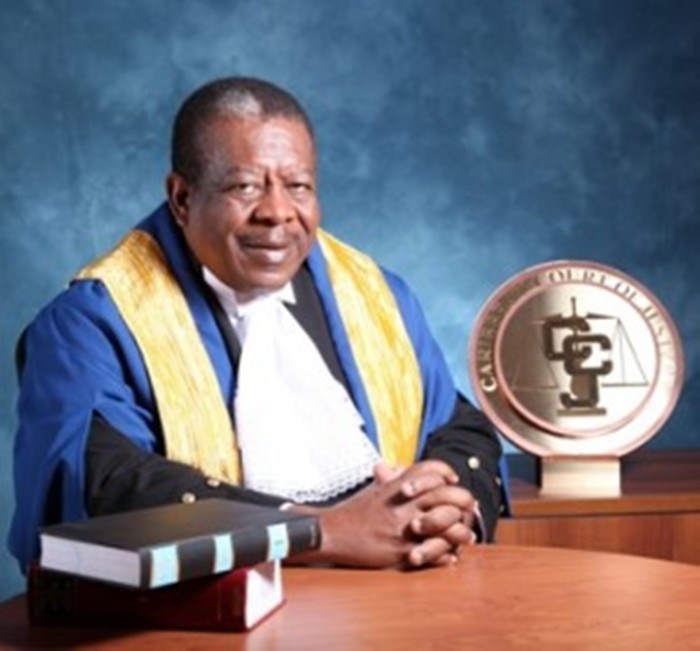 Members of the local and regional legal fraternity met in Antigua yesterday, (Wednesday 16th May) at a special sitting of the Caribbean Court of Justice to bid farewell to its president Sir Dennis Byron.

74 year old Sir Dennis, who will be 75 in July, has been president of the Caribbean Court of Justice, (CCJ) since 2011, a seven year span.

The proceedings which was brought live through Facebook, saw Justice Clare Henry giving remarks on behalf of the Chief Justice of the OECS Supreme Court, Dame Janice Pereira.

Having had a successful career, it is worthy to note that before 2011 Sir Dennis was President of the International Criminal Tribunal for Rwanda. In 1999, Judge Byron was appointed Chief Justice of the Eastern Caribbean Supreme Court, having acted in that position for two years.

Sir Dennis Byron has been also President of the Commonwealth Judicial Education Institute in Halifax, Canada since 2000.

That same year, 2000 Sir Dennis was knighted by Queen Elizabeth and he was later, in 2004, appointed a member of Her Majesty’s Privy Council.

Speaker after speaker wished Sir. Byron the best and thanked him for his tremendous contributions to the justice system.

Byron emphasized that, “I am grateful” as he explained that, his judicial journey has carried him to the bottom and to the top.

A journey he said “provided learning experiences”. He spoke of the many interactions with International Judges, he thanked the security personnel, he reminsced on an interaction with his Registrar when he was called to be a Judge.

He refelected on the experience of serving in Rwanda.

In wrapping up, Byron echoed a Special word of thanks to the special rock St. Kitts. He said, the smallest nation in the United Nations: imagine how I felt reminscing that as a small boy I could reach such success.

To our youths he stated, “do not settle for second best; the sky is the limit, the only limitation we have as a region are those imposed of by our own imagination”. He continued, “Rid yourself of mental slavery; Rise up, Stand up for your right. Finally he said, Imagine that the world would be a better place when we occupy our rightful and equal space.

Douglas calls on Harris to disclose if Peter Virdee has a St. Kitts and Nevis Diplomatic Passport

INJECTION OF $40 MILLION TO FURTHER STIMULATE GROWTH AND IMPROVE CITIZENS’ LIVES IN ST. KITTS AND NEVIS