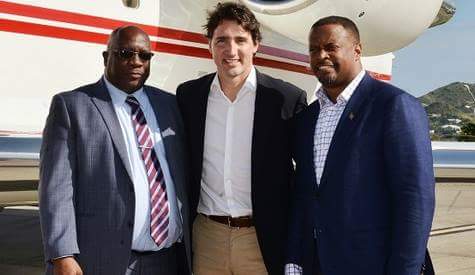 Photo Prime Minister Harris (left) and Foreign Minister Brantley (right) pose with Canada’s Prime Minister Trudeau (center) at the Robert L. Bradshaw International Airport. PM Trudeau was on a private visit with his family to vacation after winning the 2015 general election in Canada.

Basseterre, St. Kitts, June 28, 2018 – Deputy Political Leader of the St. Kitts-Nevis Labour Party (SKNLP), Hon. Marcella Liburd, has slammed Minister of Foreign Affairs, Hon, Mark Brantley for fooling the people in St. Kitts and Nevis that he and his Team Unity Government was making progress that Canada would re-introduce the no-visa requirement for nationals of St. Kitts and Nevis.

She noted that when the then Government of Canada revoked the visa-free status of St. Kitts and Nevis in 2014 during the administration of the St. Kitts-Nevis Labour Party (SKNLP), “we pointed out that it had nothing to do with the SKNLP as it was in keeping with the Government of Canada own protection of its borders.”

Liburd further pointed out that when the visa-free status was lost residents of St. Kitts and Nevis only had to apply on-line to the Embassy of Canada in Trinidad and Tobago for a visa to go to Canada and physical presence was not required.

“The Team Unity officials (Timothy Harris and Mark Brantley (who were in opposition at the time), were critical of the measure. They blamed the Labour Party ministers and promised that if and when elected they were going to fix it and have it re-instated,” she recalled.

Liburd further noted that since in Government for the past three and a half years, Prime Minister Harris and Foreign Minister Brantley have been giving the impression that progress was being made and the visa-free status was going to be reinstated.

Liburd said it must have been painful for Mark Brantley to inform the country on Monday of this week that he has failed and nationals residing in St. Kitts and Nevis will now have to pay airfare, hotel accommodation and ground transportation to travel to Trinidad to get a Canadian visa.

“Mark Brantley is now telling Kittitians and Nevisians that they should try to get their visas now before December because after that they will have to go to Trinidad in get a Canadian visa. He has been fooling off the people as usual. And now the harsh reality has hit him and his Team Unity Government. It is the deception,” said Liburd, the Parliamentary Representative for St. Christopher 2 (Central Basseterre.)