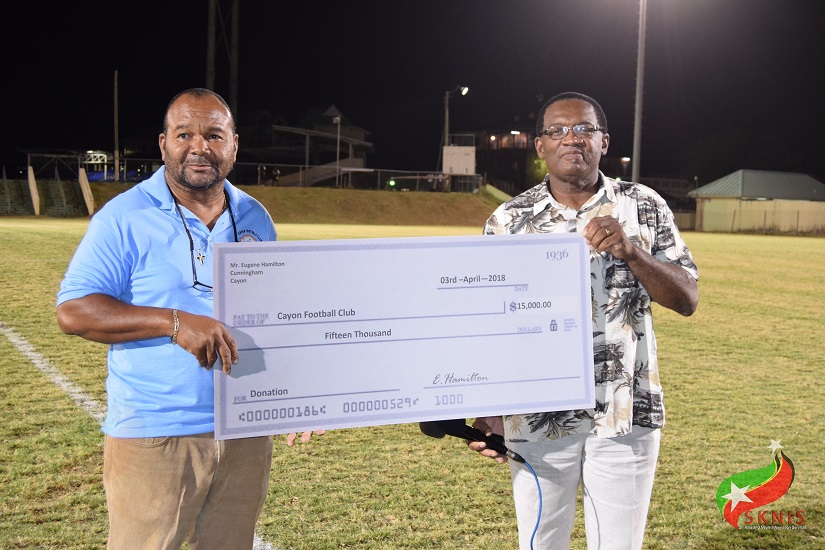 Basseterre, St. Kitts, April 05, 2018 (SKNIS): During half time at the FLOW 4G Cayon Rockets versus Rams Village Superstars football game held on April 05 at Warner Park, Parliamentary Representative for Constituency # 8, the Honourable Eugene Hamilton, handed over a cheque in the sum of EC $15,000 to the Cayon Rockets towards its participation in the 2018 CONCACAF (The Confederation of North, Central America and Caribbean Association Football) Caribbean Club Shield Championship Games, which will be held in the Dominican Republic from April 11-18.

“I am indeed pleased to be supporting the 4G Flow Cayon Football Team as it embarks on its mission in the Dominican Republic. This is a team I supported from day one,” said Minister Hamilton, adding that the team has been in existence for approximately 44 years.

Club Secretary for the FLOW 4G Cayon Rockets, Mr. Andy Blanchette, thanked the minister for his generous and continuous support of the team, specifically in helping to make the team’s trip to the championship games possible.

“We want to say thank you for such a worthy contribution as we embark upon going to the Dominican Republic to participate in the Caribbean Club Shield Championship,” Mr. Blanchette said.

Disclaimer
This article was posted in its entirety as received by SKN PULSE. This media house does not correct any spelling or grammatical errors within press releases and (or) commentaries. The views contained within are not necessarily those of SKN PULSE.