PRESIDENT TSAI LEFT WITH A HEART FULL OF LOVE AND ADMIRATION FOR ST. KITTS AND NEVIS, SAYS PM HARRIS 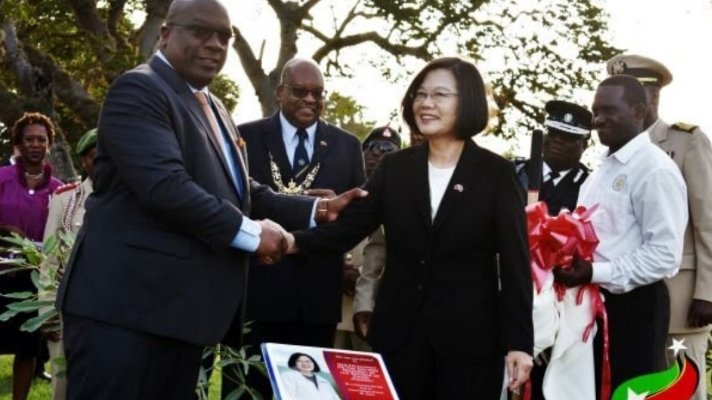 BASSETERRE, St. Kitts, July 18, 2019 (Press Unit in the Office of the Prime Minister) – The President of the Republic of China (Taiwan), Her Excellency Dr. Tsai Ing-wen, left the Federation with a heart full of love and admiration for the citizens and residents of St. Kitts and Nevis.

That was the sentiment expressed by the distinguished Prime Minister, Dr. the Honourable Timothy Harris, in response to a question posed to him at the RLB International Airport on Tuesday, April 16 at the end of the official State Visit of the esteemed President of the Republic of China (Taiwan) to St. Kitts and Nevis.

“The president told me repeatedly how amazed and delighted she and her delegation were about our Federation and that she will definitely return here again,” the prime minister said.

During her stay in the twin island Federation, President Tsai and her delegation were engaged in a number of events and had cordial exchanges and interactions with members of the public.

For this, Prime Minister Harris went on record to publicly thank all those who contributed to the successful visit, which spanned Saturday, July 13 to Tuesday, July 16.

“As I took time to do on several occasions and again on Tuesday at the RLB Airport, let me thank all the citizens and residents for their warm hospitality, their kindness and courtesies extended to our esteemed high-level guests from the Republic of China (Taiwan). Everywhere the president and her delegation went they were showered with praise, warmth and consideration by my fellow citizens and residents,” the honourable prime minister said.

He continued, “I praise the employees at the St. Kitts Marriott, the Nisbett Plantation and Park Hyatt who went out of their way to render as perfect a reception to these very important personages that graced our shores. I have high praise for our tour guides on Nevis and on St. Kitts, the ferry operators, the police, defence force, protocol staff, the event organizers, the airport and airline employees, the coordinating committee, the Explorers group and the media both locally and from Taiwan who delivered timely and up to date reports on this very special visit. So many were involved, I want to say thanks to all again.”

Prime Minister Harris singled out the contributions of the Head of State, His Excellency the Governor General, Sir S.W. Tapley Seaton, who guided the coordinating team in a judicious organization of the events.

“I thank him for receiving the president and for according her the highest honour that could be conveyed to a non-national – The Order of St. Christopher and Nevis – consistent with the National Honours (Amendment) Act of 2005.

Having been invested with a similar honour – The Order of Propitious Clouds with Special Grand Cordon by Her Excellency Dr. Tsai Ing-wen – earlier this year, Prime Minister Harris said, “I was very pleased that His Excellency Sir Tapley Seaton, our beloved Governor General, bestowed such an honour to the visiting president on her very first visit to St. Kitts and Nevis.”

Dr. the Honourable Timothy Harris also noted the historic significance of President Tsai visiting and spending time on the sister isle of Nevis.

“It is the first time a president would so honour the people of Nevis. It is the product of a Unity construct – the more inclusive way that we are being governed which has led to the relations between the NIA and the Federal Government being at the all-time best – that this historic feat should happen,” Prime Minister Harris commented.