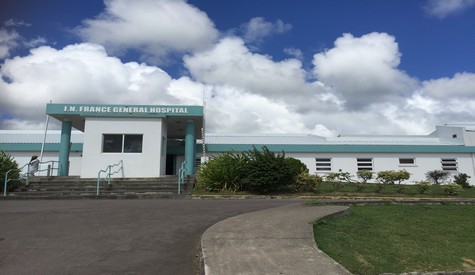 Basseterre, St. Kitts, April 12, 2018 – Reports of another prisoner being beaten by a prison officer on Tuesday night.

According to a well-placed source, a male inmate, a patient at the J. N. France General Hospital due to an undisclosed illness, was beaten by the prison officer guarding him at the medical facility.

“The inmate was beaten by the prison officer during an altercation,” said the source, who could not immediately say what actually led to the officer using his baton on the inmate.

The officer is said to be one of the three involved in a severe beating of a shackled prisoner inside Her Majesty’s Prison on March 21. The inmate was hospitalised as a result of the beating.

Tuesday night’s beating at the hospital is the fourth incident involving officers of Her Majesty’s Prison in Basseterre and the Prison Farm on Nevis for the year.

Earlier this month, a prisoner, who works as a cook at the Prison Farm in Nevis suffered severe burns while performing his duties.

In February, an inmate suffered a broken leg when he received the full impact of a “scattershot bullet” fired by a prison officer, a member of the Prison Enforcement Response Team who opened fire indiscriminately.

The prisoner was rushed to the Emergency Department at the Joseph N. France General Hospital where he was treated. The leg was placed in a cast.

Prison authorities have only confirmed an investigation was being carried out into the mid-March incident.