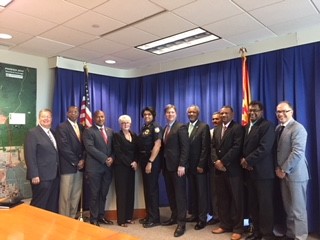 With the support of the United States Government, senior Government officials, including Ministers and Police Commissioners, from across the Eastern Caribbean and Guyana, are currently participating in a Study Tour to Phoenix, Arizona to observe how crime and violence data is helping combat crime.

The study tour, which takes place May 14 – 18, is under the aegis of the United States Agency for International Development’s (USAID) CariSECURE Project that strengthens the capacity of regional and national institutions to collect, analyze, and use citizen security data for evidence-driven crime prevention. The tour gives senior policy makers the opportunity to understand the benefits and challenges of implementing an evidence-based approach to addressing crime and violence.

During the tour, the delegation will gain firsthand experience with Police Crime Information Management Systems in the Phoenix and Chandler Police Departments. They will also meet with senior U.S. Government Officials and the Mayor of Phoenix, Greg Stanton, to observe how crime and violence data is driving the City’s crime prevention programs and policies.

USAID has partnered with regional governments for more than forty years to build environmental resilience, improve health, enhance basic education, and promote youth empowerment and citizen security. And since 2010, the U.S. Government, through the Caribbean Basin Security Initiative (CBSI), has invested $437 million toward improving citizen security in the Caribbean and addressing the root causes of crime and violence. To-date, more than 30,000 youth across the region have participated in CBSI education and work-force development programs.

Addressing the opening ceremony to launch the Study Tour, USAID Mission Director for the Eastern and Southern Caribbean, Christopher Cushing, stated “Under the CariSECURE project, USAID remains committed to supporting regional partners in developing integrated crime information management systems to strengthen Governments’ capacity to collect, analyze, and use citizen security data to target risk factors that drive youth violence, crime, and victimization. It is encouraging to know that though thousands of miles away, we have colleagues here in Phoenix who are willing and eager to support us in this effort.”

INMATES AT HER MAJESTY’S PRISON IN ST. KITTS RECEIVE EQUIPMENT TO ENHANCE THEIR PERSONAL DEVELOPMENT