According to a document filed with the Financial Services Regulatory Commission, Prime Building Depot Inc., was registered on August 31st2016 “to engage in the business of shipping and distribution of building materials.”

The Statutory Statement in compliance under Section 8 of The Companies Act CAP 21.03 lists Mr. Ian McDonald Liburd as the sole Director of  Prime Building Depot Inc. 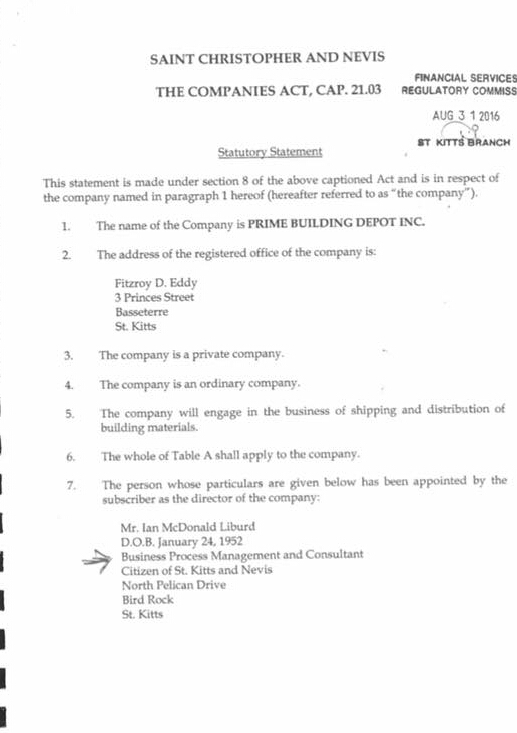 Mr. Liburd’s date of birth is documented as January 24th 1952. He is listed as a Business Process Management and Consultant, a citizen of St. Kitts and Nevis and North Pelican Drive, Bird Rock, St. Kitts, as his address.

Veteran journalist and broadcaster Canady Browne said Thursday the move is perceived to be unprecedented corruption of the highest level from a member of the Team Unity Government (TUG) of Prime Minister Dr. the Hon. Timothy Harris, which promised to passing Freedom of Information and Integrity in Public Life legislation.

“It is believed that this company of which the Infrastructure minister is the sole director will be the main supplier of concrete cement to the National Housing Corporation (NHC) when it commences construction of hundreds of low and middle income homes next year,” said Browne.

“Millions of bags of the commodity will be required for the government- financed housing development around St. Kitts and Nevis. TDC and S L Horsford’s groups are the current suppliers of cement in the federation,” said Browne, who pointed out that “observers have said that both companies helped finance the election campaign of the current government and can’t be happy with this development.”

“The majority of its directors are known supporters of the People’s Action Movement, the senior partner in the triad TUG coalition.

Since taking office several members of the government have been engaged in what can only be described as get rich quick schemes. Countless businesses have been established by the Harris family. The law firm of the Attorney General was assigned government cases. Lucrative government contracts have been given to family members and close friends of government ministers. The wooden structure from the BHS was moved at a whopping $250,000.00 by the brother of the Prime Minister’s secretary,” said Browne.

Prime Minister Harris has admitted to spending some EC$1 million to beefing security at his private property in Tabernacle.

Many hard core supporters of the PLP/CCM/PAM coalition in recent months have been publicly expressing their displeasure with the high level of corruption.

“Voters have come to the realization that they were deceived and confidence in the Timothy Harris-led TUG is at an all time low,” said Browne.

Team Unity supporter and PAM activist, Chris Roberts recently asked this question: “Which minister of government formed a company to bring in cement for the new housing development in the upcoming year to cut out TDC and Horsford?”

Roberts posting was prompted by word on the street that a cement company and a construction company were recently formed by ministers of the Team Unity government and members of their families.

The avalanche of new businesses said to be financed by funds from the Development Bank of St. Kitts and Nevis, headed by a brother of Prime Minister Harris, has also prompted Douglas Wattley, the chairman of PM Harris’ Peoples Labour Party (PLP) to referred to the 22-month old Team Unity Government as Group Unity, a stark reference to a conglomerate owning several subsidiaries.

“So when will Group Unity call out its leader regarding his corrupt acts?  If it does not, then let us do so. I want to admonish our people to be vigilant – pay attention and leak any and all information about corruption and the appearance of corruption in Government,” said Wattley specifically referring to alleged activities involving “bulldozers, car rentals, construction companies, sidebar deals with companies out of Barbados, inappropriate promotion of in-laws, (and) allegations about the misappropriation of campaign funds.”

Wattley, who for the past several months has been publicly expressing his disagreements with Prime Minister Harris on governance, transparency and accountability issues in the absence of legislation governing Integrity in Public Life and a Public Accounts Committee (PAC) in the National Assembly, called on the people to “implement our own “Freedom of Information Act.”

“I think the time is ripe for an internal move to replace the Prime Minister. If not, let us try a Motion of No Confidence,’ Wattley also said in a recent FaceBook posting.

A WINNFM news report in August said many PLP supporters have lost confidence in the leadership of Prime Minister Harris and there is “a gigantic rift between the leader and the deputy political leader, Sam Condor.

WINNFM reported also that those within the PLP critical of Prime Minister Harris, cite what they describe as certain moral and ethical transgressions relative to the conversion of campaign financing that they want addressed.

Another key PLP and Team Unity figure, Clecton Phillip, who resigned after one year as Press Secretary to Prime Minister Harris, noted several months ago that “Prime Minister/Minister of National Security/Minister of Finance Dr. T S Harris, who is yet to inform the nation of the name(s) of the owner(s) of T&S Rentals – a vehicle rental company whose cars are seen regularly (in Basseterre) being driven and utilised by members of the Police force and the Defence Force, has not fulfilled its promise with regard good governance.”

Mr. Phillip has since left St. Kitts and resides in Canada.

Prime Minister Harris is also yet to resolve differences within his People’s Labour Party over alleged lack of accounting of millions of dollars given to the party for campaigning purposes last election.

Prime Minister Timothy Harris has to date not made any definitive public statement on the alleged differences some say are tearing the party apart from within.