The call was made Thursday night at a massive public meeting in St. Paul’s, part of the St. Christopher 6 constituency that Douglas has been representing for 28 years in the St. Kitts and Nevis National Assembly.

“Let us at this time in a moment of prayer and reflection, think of the people of Venezuela as they go through this period of crisis, social, economic, financial and political. We believe that they need us at this time because they have been there for us on so many occasions in the part,” Dr. Douglas, Leader of the Opposition told the crowd.

“Let us stand in solidarity with the people of Venezuela in a moment of silence for reflection and prayer,” Dr. Douglas said. 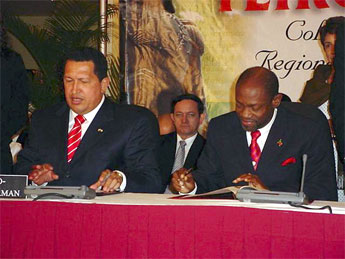 “Investors and developers have been turned off. We have a begging prime minister. This is not good. The image of the country has changed dramatically and it has to be rebuilt,” said the former Prime Minister.

Kittitians and Nevisians have taken to social media to criticise Prime Minister Harris for recently soliciting 50 “Petrocasas” houses from Venezuela’s President His Excellency Nicholas Maduro during a visit to Caracas last month at a time when Venezuela is experiencing severe economic problems.

They are of the view that Prime Minister Harris should have taken a cheque instead of a begging bowl to Caracas since he claims to have millions of dollars in surpluses in the St. Kitts and Nevis treasury.

“The preliminary data show that for 2016 the fiscal operations resulted in a recurrent account surplus of $128.3 million, an overall surplus of $130.3 million and a primary surplus of $154.7 million. These three accounts to which I have referenced are part of what is considered the economic classification data. They are the principal accounts to which persons who do assessments of our country and every other country look for a measure of its performance. Yes, this is an international indicator of how well a country is managed,” a recent release from the Office of the Prime Minister quotes Dr. Harris as saying.

Since taking office in February 2015, Prime Minister Harris has received US$16 million for ex sugar workers and another US$10 million for the Development Bank of St. Kitts and Nevis.

Venezuela’s capital, Caracas, has seen almost daily demonstrations in recent weeks, some of which have turned violent.

Critics are accusing President Nicolas Maduro of moving towards a dictatorship, and want him to resign.

But Maduro says the opposition is conspiring with foreign entities, specifically the US, to destabilise the country.

Bust of Dr. Sir “Sim” Daniel unveiled in the heart of Charlestown