STILL GOING STRONG AT 101, DEPUSOIR IS CONGRATULATED BY GOVERNMENT ON BIRTHDAY

BASSETERRE, ST. KITTS, DECEMBER 28, 2016 (SKNIS) —Samuel Depusoir is an extraordinary man. He has never smoked nor taken a drink in his life, perhaps, the reason for his longevity. At 101 years, he has outlived many of his generation and even those not of that generation. He still makes mauby, which many say is the best around, and has been an entrepreneur at heart for almost all his life, where he has operated a poultry and egg farm, a small village shop, and trucking and taxi businesses. It is no wonder that Depusoir, better known as “Depo”, is a household name around the entire island.

Mr. Depusoir was born on December 23, 1915. He was once married, but his wife died over 40 years ago. He has fathered 10 children and is a grandfather, great grandfather and great-great grandfather to many, a testament to his prolific age. All his children live abroad but some were present to celebrate with him on his 101 birthday, while all 10 came home last year for the big 100. 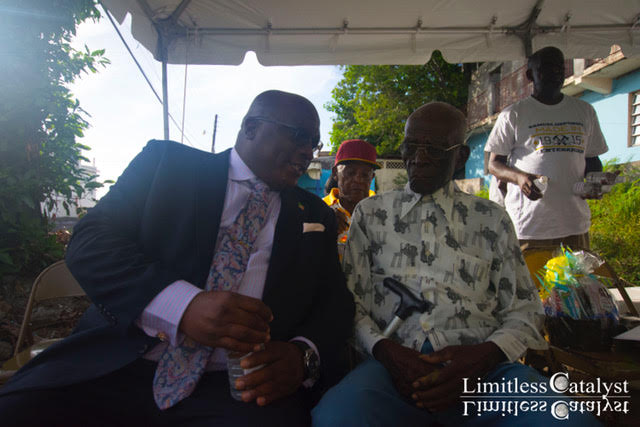 On December 23, Mr. Depusoir was joined by Prime Minister of St. Kitts and Nevis, Dr. the Honourable Timothy Harris, Deputy Director of Social Services, Ann Wigley, family, friends,  and Mrs. Veronica Byron, a nonagenarian (who celebrated her 91st birthday on Boxing Day, December 26), at a birthday party in his home village of Challengers. Reverend Mark Christmas performed the rites of blessing.

On behalf of the government and Cabinet, Prime Minister Harris congratulated Mr. Depusoir on the attainment of such a ripe age. Dr. Harris said that he marveled at the fact that Mr. Depusoir was still so vivacious, while he praised him for his service to the community through his entrepreneurial endeavours. The prime minister extended God’s richest blessings, good health, happiness, peace of mind and a more humbled walk with God to the centenarian, who was accompanied by Mrs. Byron. He saluted him for his service to the country on behalf of the Government and people of St. Kitts and Nevis.

In a letter to Mr. Depusoir on his 100thbirthday last year, Prime Minister Harris said “I am indeed honoured to be able to address you on the occasion of your 100th birthday. The attainment of this major milestone is no small feat, given that it is an age which many individuals aspire to but relatively few are able to see come to pass.”

Mrs. Wigley said that the Ministry of Social Services is extremely happy to join Mr. Depusoir in celebrating another milestone in his life. She thanked the family and all those who care for Mr. Depusoir, including a special neighbour of Mr. Depusoir, Mr. Hendrickson. She said that the ministry continues to wish both Mr. Depusoir and Mrs. Byron well and prays for their health and strength.