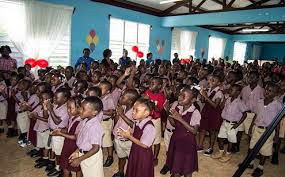 (EMU) – St. Kitts, May 30, 2018: Government School teachers from the East Zone were told on Tuesday that they may see a larger number of students coming to their schools in September.

This was announced by Chief Education Officer Dr. Tricia Esdaille as she revealed the intention of the Ministry of Education to implement a strict zoning policy for students entering new schools including high schools for the upcoming school year.

According to Dr. Esdaille the policy had been written on paper but never strictly implemented in St. Kitts which has lead to overcrowding in the Basseterre Zone and under-population in other zones.

“You are the smallest Zone as far as student population, “said Dr Esdaille as she sought to clarify the rationale for the likely increase in the number of students in the East and possibly the West Zone in September. “In some schools your total enrolment is less than a single grade in another school. Where are your children? They are in Basseterre,” Dr. Esdaille emphasized, adding that that has major implications for the school system.

She further stated that for the sake of efficiency the ministry needs to ensure that children are actually attending school in the zone where they reside.
The Chief Education Officer intimated that it is easy to think that the ministry is rigid in its policy implementation because every individual is convinced that their personal matter is of utmost importance, however the ministry has made some allowances for out of zone placement.

“Although the Ministry intends to undertake a very strict stance on the zoning and placement of students in September, arrangements have been made for allowances for out-of- zone placement for three categories of students,’ Dr. Esdaille emphasized.

A release from the Education Media Unit notes that these will include:

1. Students in need of special programming and support: eg. special ed, access to medical services
2. Students who have siblings who are already in the school (if they live under the same roof)
3. Compassionate placement.
“We need to ensure that there is efficiency in the way we allocate resources within the system. That is the bottom line,” stated The chief of Education Officers.

All three categories will be considered with priority given just as the categories are numbered. In other words, Students in need of special programming and support will be given first priority, followed by sibling placement and compassionate consideration.

A special review panel will do placement for out-of-zone requests.
Forms for such requests will be made available at schools as well as the Ministry of Education Stanford and Cable Buildings.

Zonal Meetings continue today with teachers from the West Zone; having already had the Basseterre and East Zones on Monday and Tuesday respectively.