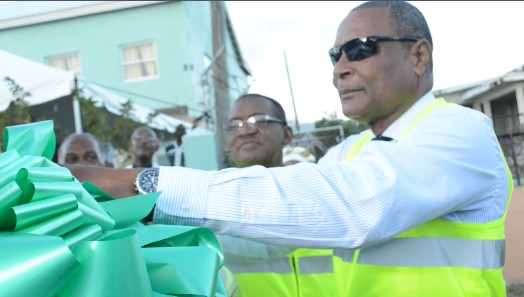 Caption: SWMC Director Denzil James cutting the ribbon on one of the trucks symbolically commissioning the new garbage trucks.

The Solid Waste Management Corporation on Friday commissioned three brand new garbage trucks worth some EC$1.5 million at a commissioning ceremony at the SWMC headquarters in Taylors Range. After years of enduring challenges with old trucks, the corporation as able to finally purchase new trucks without incurring any debts, quite similar to how it constructed its four year old state of the art headquarters. Speaking at the commissioning ceremony, Director of the SWMC and CEO of the St. Christopher Air and Seaports Authority (SCASPA) Denzil James said the new garbage trucks are part of the mandate of the board of directors of the corporation in improving the efficiency of keeping the country clean. “Our job at the corporation therefore calls for a smart handling of waste, which not only includes the processing and recycling as per the latest technology, but also the collection and transportation of this waste to the landfill in an efficient, effective, sustainable and timely manner,” Mr. James said. 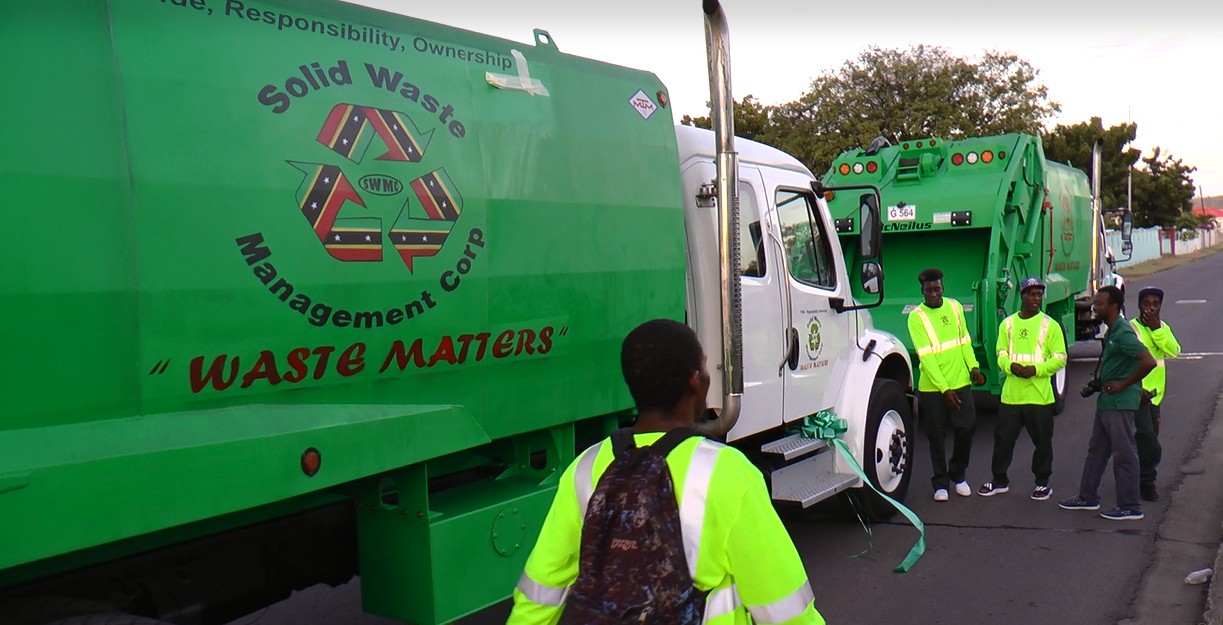 Caption: The new garbage trucks after they were blessed and commissioned on Friday January 25, 2019.

Minister with responsibility of the SWMC Mr. Eugene Hamilton lauded the SWMC on this milestone achievement and highlighted the need for the investment in the new trucks. “In this island some 40,000 people with thousands of business and institutions there is only 11 garbage trucks, there is just one truck that we hope is in good working condition to collect your garbage. If you do a little bit of math, if you divide the 40,000 by 11, you get some 3636 people—so there is just one truck for the service of 3636 people as we speak, and this includes those in the private sector that are providing service to us,” Minister Hamilton said.
General Manager of the SWMC Mr. Keithley Phillip explained some of the features of the new truck. “The compactors are 20 cubic yards. Twenty cubic yards ensure that they can pick up a good amount of garbage prior to returning to the landfill,” Mr. Phillip said. “The brand is McNeilus and it’s what we call rear loaded and by rear loaded we mean they can lift bins and dump them into the rear of the truck. Its sturdy, the controls are in an area that can be easily reached by the loaders,” he continued.

Meanwhile, Senior Minister Vance Amory, who spoke on behalf of the Prime Minister and Deputy Prime Minister, who were both away on government business, stressed the importance of a clean environment and the role these new trucks will play.

The corporation also used the opportunity to introduce the new uniforms for SWMC workers. The trucks were blessed by Canon Dwane Cassius followed by the ribbon cutting by Ministers Hamilton and Amory and Director James. The trucks were placed in rotation and in operation as of Monday January 28, 2019.