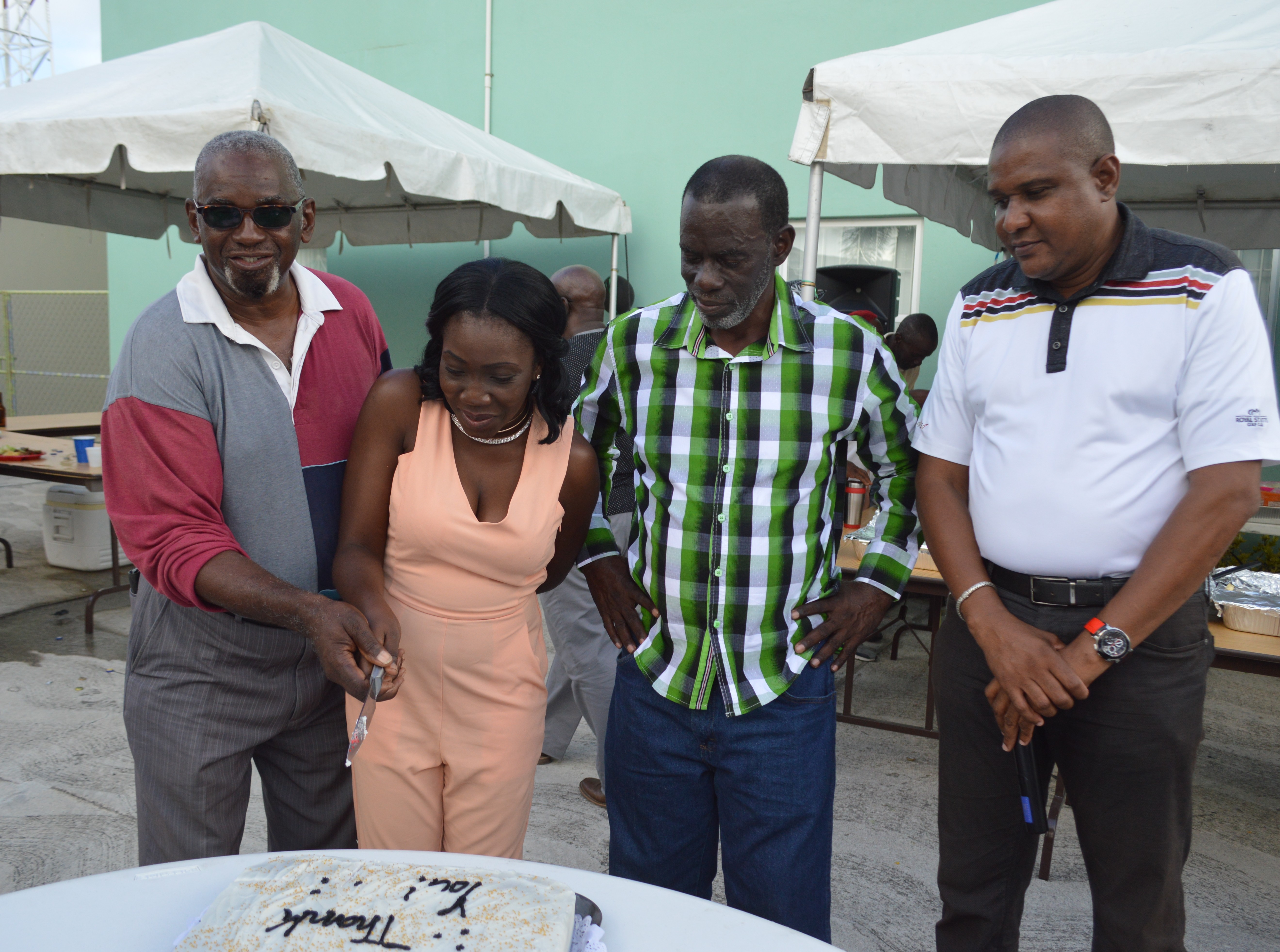 Photo caption: From left: Outgoing Operations Supervisor Wilmon McCall cuts a party cake along with SWMC employee Jonelle Francis, while outgoing General Manager Alphonso Bridgewater (second from right) and Chairman of the SWMC Board of Directors Ivan Hanley (far right) look on. This was during the special retirement event held recently on the grounds of the SWMC Headquarters in Taylors Range.

The Solid Waste Management Corporation recently bade farewell to two of its most valuable employees in retiring General Manager Alphonso Bridgewater and Landfill Operations Supervisor Mr. Wilmon McCall. At a social gathering recently on the grounds of the SWMC Headquarters in Taylor’s Range, staff members and Chairman of the Board of Directors Mr. Ivan Hanley, spoke highly of both gentlemen, as they were lauded for their years of valuable contribution to the development of the Corporation in its formative years. Mr. Hanley was keen to point out that Mr. Bridgewater is one of the foundation members of the Corporation, having served faithfully for over 20 years.

“Over the years you have seen the establishment grow from stride to stride and one of the monuments of their hard work is the building where we are gathered….we will use as a platform, the foundation that they have laid to continuously grow as we aspire to turn the organization into what their envisioned was,” Mr. Hanley said. “I want to publicly thank them for their years of service.” Mr. Hanley also had words of commendation for Mr. McCall.

Meanwhile, both Mr. McCall and Mr. Bridgewater spoke briefly to the gathering as they prepared to leave the corporation. “Our relationship over the last two years since I have been here as a director, in my view, it has grown us in our characters,” the chairman said.
Meanwhile, at the ceremony, Mr. Bridgewater pointed out that the staff should be prepared to embrace the new transition the SWMC has entered, as it bodes well for the further development of the Corporation. “The transition that this corporation has gone through from year to year and the one it’s going through now, won’t be the last,” he said.

He explained the different phases of the transition of the SWMC including when there was a change of government, moving from a rented building to its own office complex and whenever there are staff turnovers and management changes. The outgoing General Manager stressed that staff should also embrace the transformation that the Corporation is experiencing, as it will be beneficial to them in the long term. One big transformation, he noted, was the coming on stream of new garbage collection trucks, which are to be acquired soon by the Corporation.

As for Mr. McCall, he expressed gratitude for those who reached out to him to thank him for his contribution to the Corporation. He made special mention of Romaine Belgrove, one of the truck drivers with the SWMC, who offered laudatory words to him on his departure. “I have mixed feelings because I know they are persons who called me and expressed gratitude and thanks for the time that we spent at Solid Waste Management,” he said. “One of the best calls that I got was from Belgrove…he as very adamant about the fact that (I) have practically shaped the way that some of the workers think,” McCall said. He thanked his other colleagues present at the function, noting that the mere fact they were there to wish him farewell, proves they really care about him and the work he did at the Corporation.

Mr. McCall has been working with the Corporation for 16 years. Both men said little about what they will do now that they are retired, but expressed gratitude at the years of service they were able to offer to the SWMC.