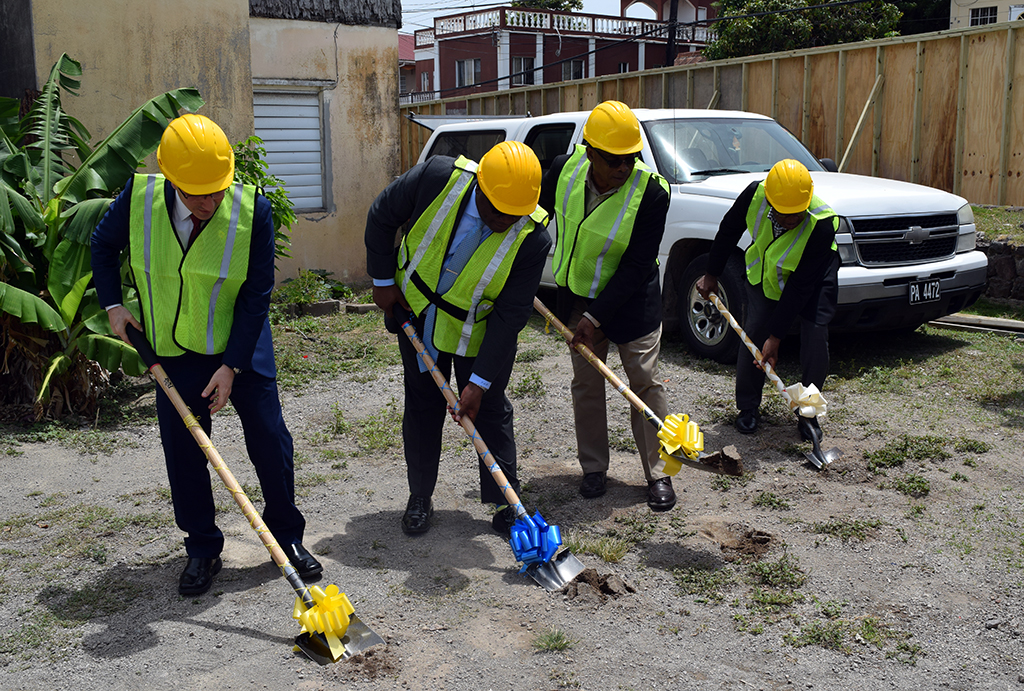 BASSETERRE, St. Kitts, June 28, 2018 (Press Unit in the Office of the Prime Minister) – The Team Unity Government broke ground today, Thursday, June 28, for the construction of a new multimillion housing complex at Wellington Road in East Basseterre – just two weeks after the Government distributed more than 40 homes to families in Half Way Tree, Sandy Point and Saddlers Village.

The Wellington Road housing project, which will be built at a cost of just over US$8 million, is being jointly funded by the National Housing Corporation (NHC) and the Bolivarian Republic of Venezuela, through the social initiative of the Petrocaribe arrangement.

When completed, the new complex, which will accommodate some 60 families in modern living spaces, will add to the more than 140 houses already constructed and distributed to date under the Unity Housing Solution scheme.

Minister of Human Settlement, the Honourable Eugene Hamilton said this social housing development, coupled with the HELP programme, as well as the recently launched mortgage financing programme for civil servants, form part of the overall ambitious and robust housing programme initiated by his Government since assuming office in 2015.

The minister said, “These programmes are all geared towards the Unity Housing programme, which is designed to ensure that the standard of the housing stock of the country is raised.”

Delivering remarks, Prime Minister Dr. the Honourable Timothy Harris stressed that this project is a major development in the efforts of the Team Unity Administration to deliver more homes to the people, “to improve and increase the stake of ordinary people in the St. Kitts and Nevis which they love.”

“Ten building blocks will be delivered, bringing 60 units for some 60 households; modern units which would enhance Basseterre and would improve upon the living conditions of all the people,” the prime minister said, while also expressing his satisfaction with the performance of Parliamentary Representative for East Basseterre, the Honourable Ian Patches Liburd, in the delivery of another major project for the benefit of the people.

Prime Minister Harris further expressed his gratitude to the Government and people of the Bolivarian Republic of Venezuela for its assistance in improving the housing stock in the Federation.

Dr. Harris added, “I am happy to acknowledge that the relationship between St. Kitts and Nevis and Venezuela remains a very strong one, and this is in part due to the fact that President Chavez, who will long be remembered and honoured by the people of Venezuela, opened the eyes…of the people of Venezuela to the reality that there was a Caribbean comprising of nation states with people and their governments who were part of their world and who they could join together in collaboration and cooperation for mutual benefit.”