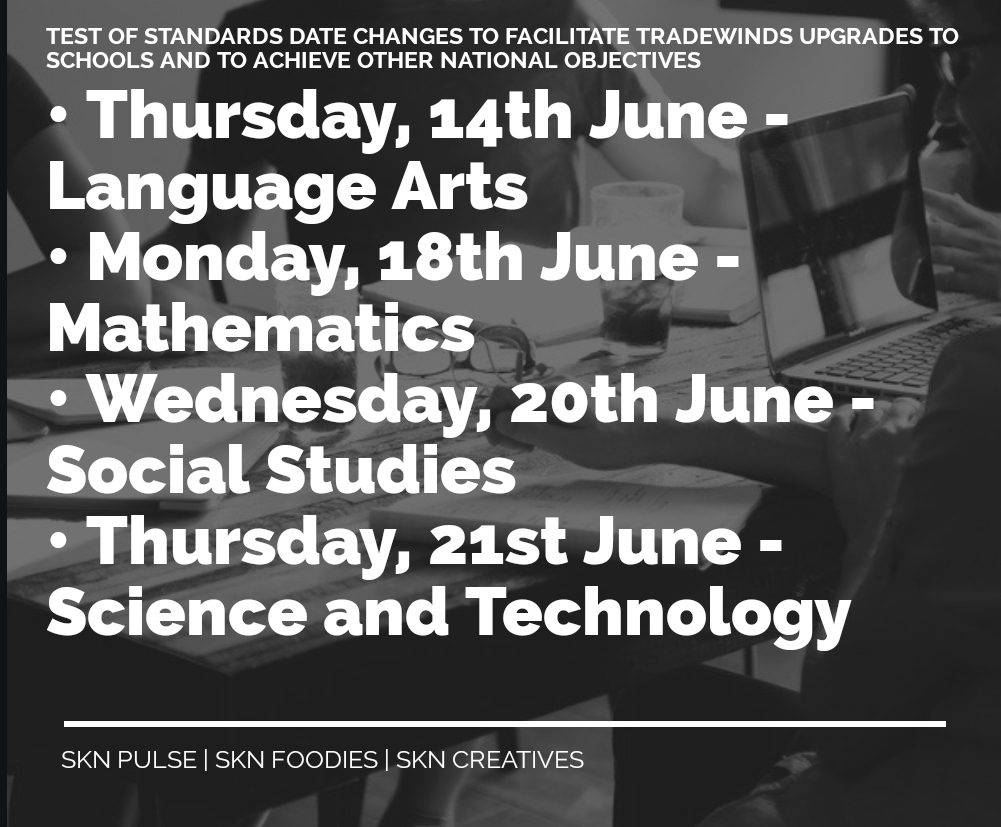 (EMU) – St. Kitts, June 4, 2018: The Ministry of Education has issued an apology to stakeholders as it has had to make a further change to the Test of Standards dates for 2018.

According to Permanent Secretary in the Ministry of Education Mr William Hodge, the initial change in the administration of the national assessment was made to facilitate a proposed project by the Tradewinds that would benefit several of the primary schools in St. Kitts.

Mr Hodge revealed specifically that the participants in Tradewinds 2018 from territories around the Region are slated to paint four schools on June 12. That date was in direct conflict with the beginning o f the Test of Standards.
“In an attempt to resolve the conflict, the start date for examinations was pushed back by one week,” Mr Hodge explained.

The Permanent Secretary added that subsequent to the initial change it was drawn to the attention of the Ministry that the new dates were again conflicting with other national events affecting schools in the Federation.

As such, a meeting of key stakeholders was held on Friday June 1 during which a decision was taken to revise the dates of the 2018 testing period as follows:
• Thursday, 14th June – Language Arts
• Monday, 18th June – Mathematics
• Wednesday, 20th June – Social Studies
• Thursday, 21st June – Science and Technology

Stakeholders agreed that the new dates will achieve several national objectives including benefitting from the community work of the Tradewinds exercise by having the schools painted.

Additionally, the participation of all grade 6 students in the national jamboree planned for June 25 can now be realised to its fullest.

It is anticipated that most schools will have the results from the Test of Standards to inform their decisions in relation to graduation. Students will also be able to stay at their home schools for the duration of the examinations.

According to a release from the United States Embassy in Barbados “Tradewinds, sponsored by United States Southern Command…is a joint, combined exercise, conducted in conjunction with partner nations to enhance the collective abilities of defense forces and constabularies to counter transnational organized crime and terrorism, and to conduct humanitarian assistance and disaster relief operations.”