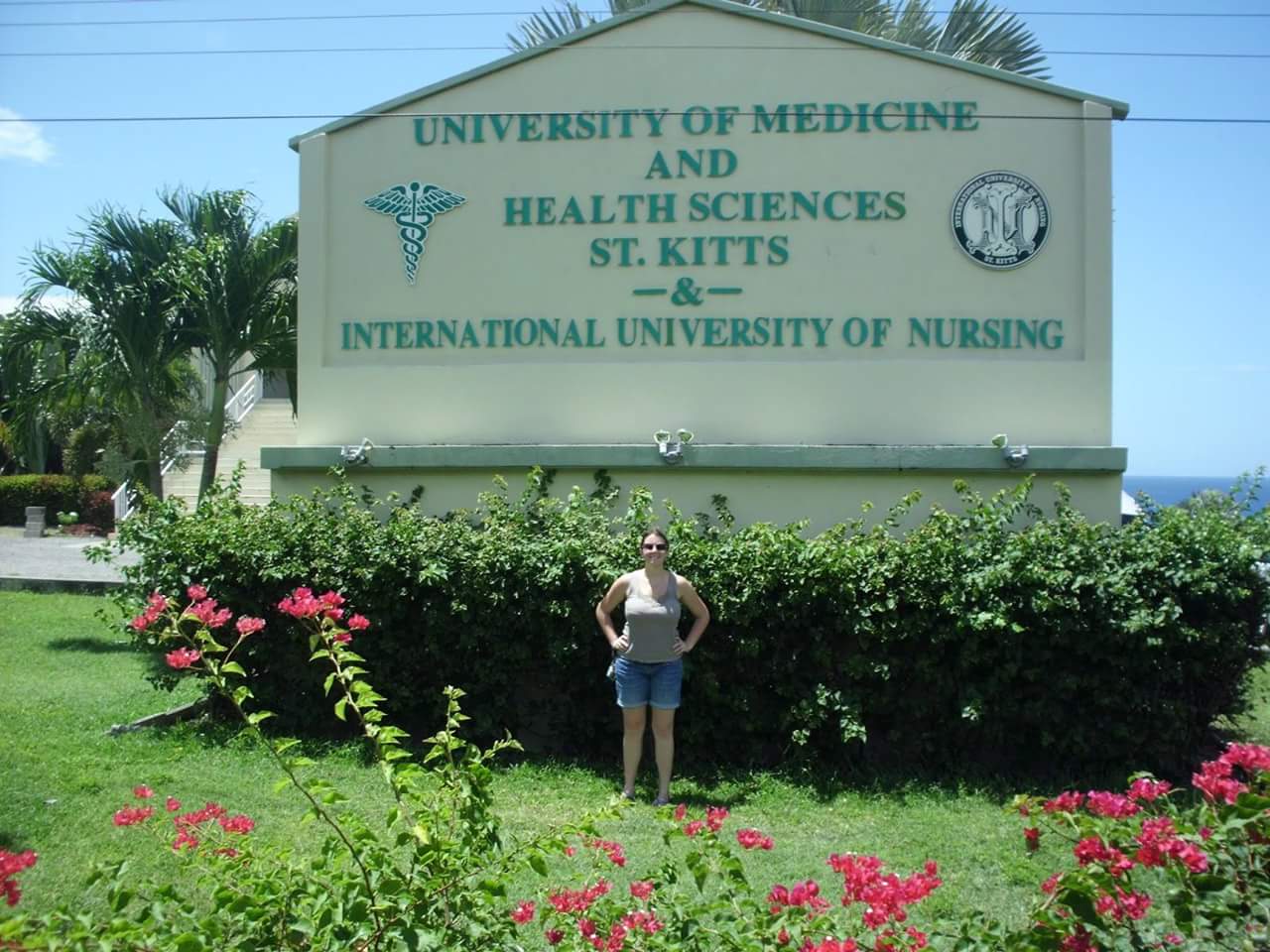 Basseterre, St. Kitts, April 28, 2018 – The tragedy of Hurricane Maria is still affecting Puerto Rico more than seven months later. The island continues to struggle as power is restored and areas start rebuilding, but the physical and mental health of the people are among the most serious ongoing challenges, as UMHS student, proud Puerto Rican native and Med4You non-profit founder and president Ariana Hernandez explains.

Ms. Hernandez and her organization Med4You, comprised of UMHS students devoted to advocating health care as a human right, especially in disadvantaged communities, responded immediately after Hurricane Maria hit Puerto Rico on September 20, 2017. First, by creating a Go Fund Me page (with the help of UMHS students, the Student Government Association, faculty, staff and President Warren Ross) to raise a total of $45,000 specifically for Puerto Rican medical services.

However, the UMHS students involved with Med4You did not simply raise money for Puerto Rico. These future doctors showed they truly understood the altruism required to assist people hurting financially, physically and emotionally.

Med4You organized clinics over their Christmas holiday break in three separate Puerto Rican communities among the hardest hit by the catastrophe: La Mocha in Ponce; Arecibo; and in the town center of Ponce. “Doctors have closed their offices, others are fully booked or the families don’t have the money to treat their diseases,” Ms. Hernandez said, pointing out why doing the clinics was so important.

The first medical clinic in Puerto Rico was set up on December 27, 2017 in the “La Mocha” area near Ponce, Puerto Rico.

“We provided medical services, psychological services, social worker services and nurses,” Ms. Hernandez said. “By the end of this clinic, we also did visits to individual homes for the critically ill.”

The second clinic was set up on December 29, 2017 in the town of Arecibo, Puerto Rico. Finally, the third clinic was held on January 4, 2018 in Ponce town center.

“This was our biggest one,” Ms. Hernandez said. “We provided cardiology, pediatric medicine, general medicine, psychiatry, psychology, social work and nurse services. In addition to the health services, in our clinics, we donated clothing, food, water and hygiene articles. We were able to help many people that lost everything after Hurricane Maria, and the homeless, too. Also, we achieved one of our goals joining together students from different medical schools (PHSU, UMHS, and UCC). We shared our knowledge and gave the patients our best.”

Students also visited the University Pediatric Hospital at Puerto Rico Medical Center in Rio Piedras, San Juan. “We were here for Three Kings Day (the Feast of the Epiphany”, playing with the pediatric oncology patients and giving them gifts. Many of the families lost their homes too, while at the same time their kids were suffering from cancer. However, their hope and strength were admirable.

“People are in a desperate need of health services in disadvantaged communities,” Ms. Hernandez said. “For this reason, we are committed to keep doing many more clinics and in the near future helping the healthcare system in Puerto Rico.”

UMHS faculty, staff and students raised an estimated $45,000 to help the people of Puerto Rico affected by Hurricane Maria. Donations were given to the Ponce Research Institute at the Ponce Medical School Foundation, Inc. in Ponce, Puerto Rico to bring further aid to students and communities in need during these months. A total of $5,000 was donated to the Gogo Foundation in Ponce to help them rebuild the damages that Maria caused to their infrastructure. The Gogo Foundation gives medical services to pediatric patients in Ponce.

“Words cannot express how grateful we are for the support provided by you during these difficult times,” Dr. Thompson said. “You came to our aid with a generous donation, comforting messages, and support for our faculty, students, researchers, and ongoing activities.”

UMHS students have been bringing hope to other parts of Latin America as well. Just one month before Hurricane Maria hit, eight UMHS students involved with Med4You and UMHS professor Angel Matos, M.D. volunteered on a mission trip to Zacapa, Guatemala, a remote, poverty-stricken area of the Central American nation with little access to medical care.

Med4You organized clinics and saw more than 350 patients with various illnesses and conditions, providing people with antibiotics, antifungals, vitamins and other medication.

“Throughout this trip, we saw the conditions in which this community lived in and we couldn’t help ourselves but to empathize with them and the rest of the world,” Ms. Hernandez said. “We took it upon ourselves to work and put out our best effort in providing these individuals the health care that every human being deserves.”

UMHS Med4You has scheduled medical clinics again in Latin America from April 26 to May 3, 2018.