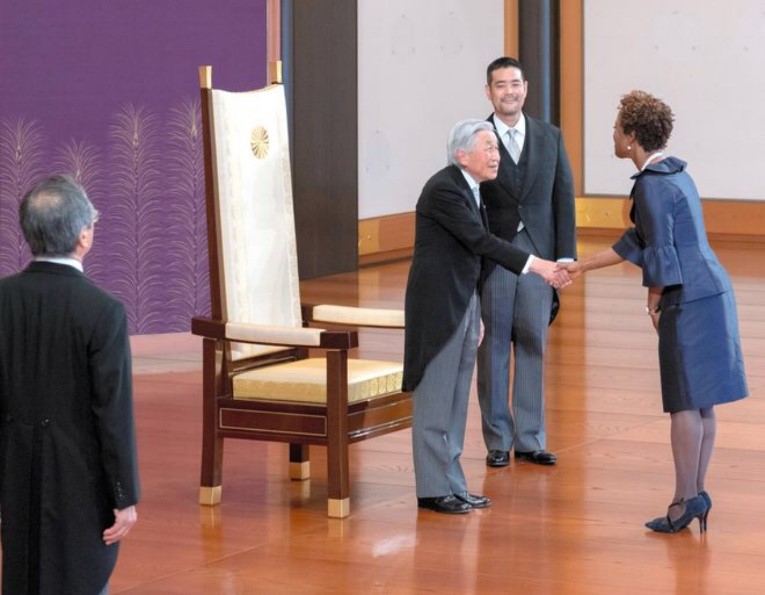 Emperor Akihito welcomes Jasmin Huggins, the new ambassador of Saint Kitts and Nevis, at the Ceremony of the Presentation of Credentials at the Imperial Palace on July 5. (Provided by the Imperial Household Agency)

Tokyo, Japan (5 July, 2018) – On Thursday 5 July, 2018, Her Excellency Jasmine Huggins, the Federation’s newly accredited Non-resident Ambassador Extraordinary and Plenipotentiary to Japan presented her letters of credence to His Majesty, Emperor Akihito at the Imperial Palace in Tokyo.

During the exchange with His Majesty, Emperor Akihito, Ambassador Huggins conveyed greetings on behalf of His Excellency the Governor General, Sir Tapley Seaton GCMG, CVO, QC, JP and the Government and people of St. Kitts and Nevis and extended best wishes to His Majesty for his health and the welfare of citizens of Japan.

Ambassador Huggins also had the opportunity to meet with the Hon. Minister of Environment and Minister of State for Nuclear Emergency Preparedness Mr. Masuharu Nakagawa who also attended the Ceremony and Ambassador Takahiro Nakamae, Assistant Minister, Director-General of Latin American and Caribbean Affairs Bureau.

The Hon. Minister also pledged his government’s commitment to doing more to help the people of St. Kitts and Nevis in this area.

Her Excellency Jasmine Huggins is also St. Kitts and Nevis’ resident Ambassador Extraordinary and Plenipotentiary to the Republic of China (Taiwan).